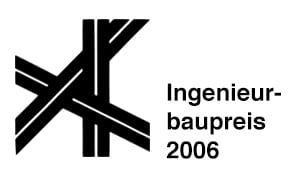 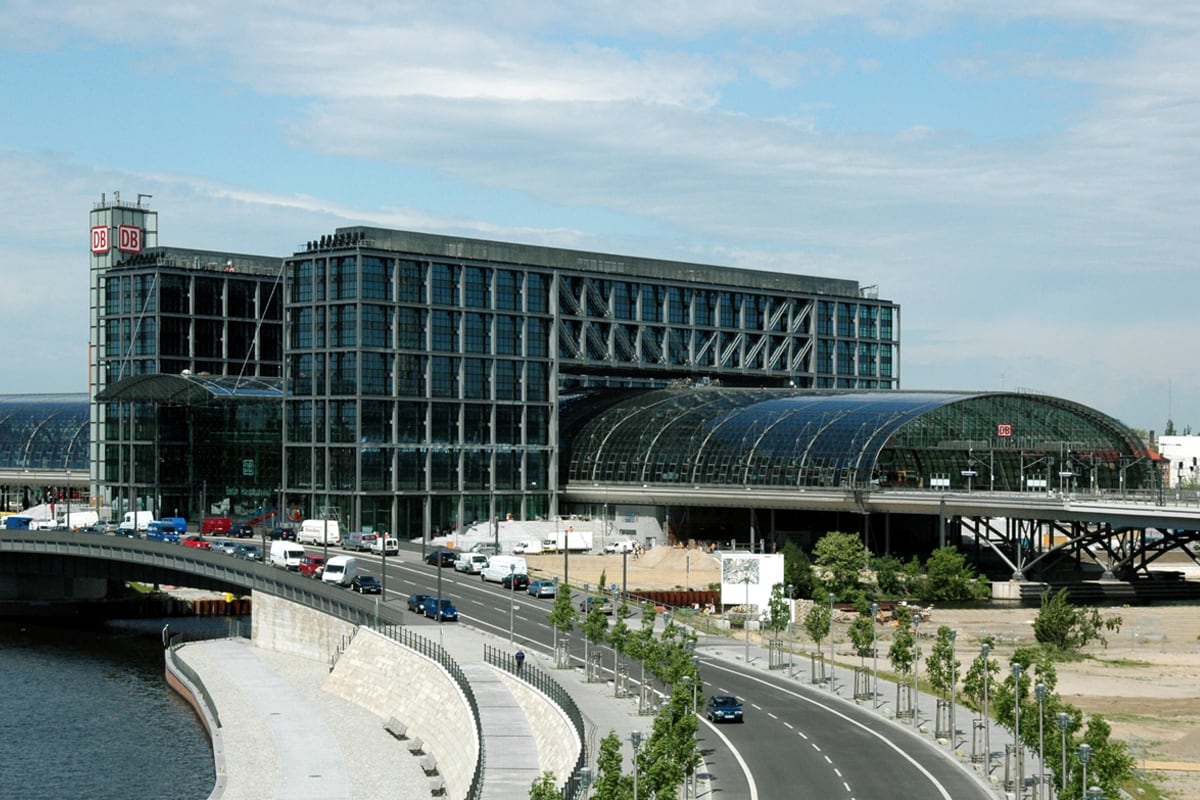 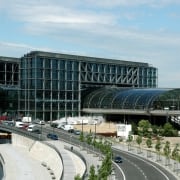 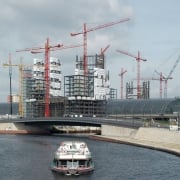 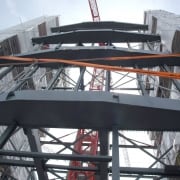 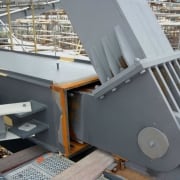 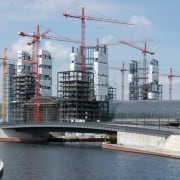 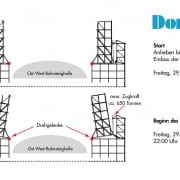 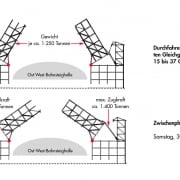 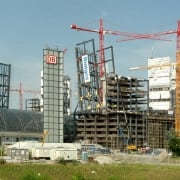 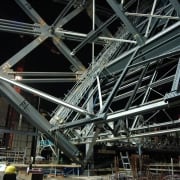 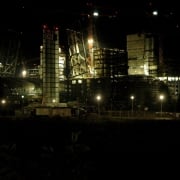 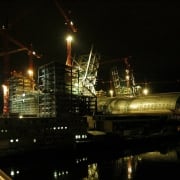 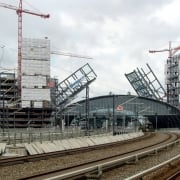 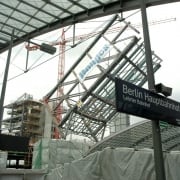 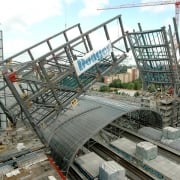 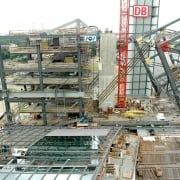 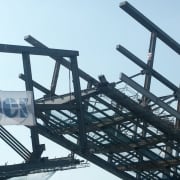 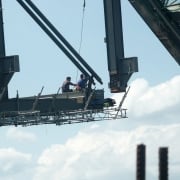 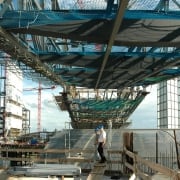 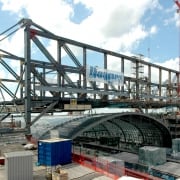 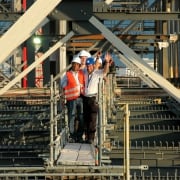 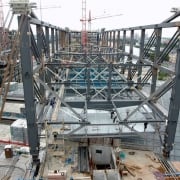 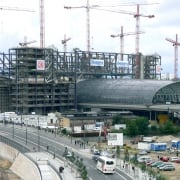 On two weekends in the summer of 2005, the bridge halves of the stirrup-shaped buildings of Berlin’s Central Railway Station were folded like drawbridges over the East-West station hall in a sensational assembly process.

With Berlin’s new Central Railway Station, built in eleven years at the site of the historic “Lehrter Bahnhof”, will go into operation from mid-2006, just in time for the FIFA World Cup, and become Europe’s largest intersection railway station.

Within the scope of this construction project, Donges Stahlbau GmbH erected the shell of the so-called stirrup structures above the existing East-West glass roof. The project scope included both steel construction with a total volume of approx. 9,500 tons and the solid concrete construction for ceilings, stairwells and elevator shafts with approx. 16,500 cubic meters of concrete and lightweight concrete and 3,500 tons of reinforcing steel. Between four 12-level towers with a height of 46 meters made of up to 1,000 tons of steel, two bridges with four stories span the 87-meter railway tracks. Each bridge weighs 2,500 tons during the tipping process. In addition, these bridges support the 210 meter long North-South glass roof in between, which was manufactured and installed by the consortium partner MERO TSK. Each of the two stirrup-shaped structures encompasses 22,000 square meters of floor space.

The bridge structure essentially consists of two lateral steel composite truss sections supporting the four floors of the bridge in between. The North-South glass roof is suspended from the interior truss panes of the bridges and closes the gap in the East-West roof as the roof of the future main hall of the station.

To enable the bridge construction of the stirrup-shaped structures without impairing rail traffic, an unusual assembly concept was chosen: two bridge halves were erected vertically on a platform in the fifth floor level of the arched towers, in order to be folded into the horizontal end position via two joints located on the inner sides of the tower – similar to the closing of a drawbridge – and finally welded together when rail traffic was blocked.

Planned for two and a half years – after all, 2,500 train connections, from the urban commuter railway, right down to European long-distance train connections, were affected –, the first of two “full shutdowns” for the spectacular initial tilting operation for the west bridge, followed worldwide, took place from Friday, July 29, 2005, 10 p.m. to Monday, August 1, 2005, 4 a.m. After 20 hours, the two bridge sections parts had reached their horizontal end position. Two weeks later, from August 12 to 15, 2005, the east bridge was brought into its final position according to the same procedure.

The Swiss company VSL, active worldwide, was responsible on behalf of Donges for the heavy-duty lifting equipment for the tilting process. With the help of steel strand bundles, hydraulic presses hoisted, held and lowered the 1,250 ton truss structure of one half of the bridge.

First, each half of the bridge was lifted with a tractive force of approx. 650 tons and tilted via the joints to nine degrees from its vertical position. The lifting device required for this, consisting of four presses and cable bundles arranged in pairs, was installed on the top floor of the tower. Now there was enough space to mount the lowering device attached below the fixing points of the lifting device. The lowering device, required to handle the up to 1,400 tons of tractive force in a horizontal bridge position, consisted of two sets of four presses and cable bundles per bridge half. The actual tilting process began when the building section was swung from its nine-degree position into its tilted position of “unstable equilibrium”. In this position, even minor horizontal gusts of wind could have influenced the tilting direction of the section if it had not been held in both directions by the lifting and lowering device. The presses were controlled in such a way that the cable bundles were never without load, i.e. the construction was able to be tilted beyond the center of gravity without jolting and therefore could not tip over. In zero wind, the structure’s tilt angle was 29.5 degrees, and depending upon wind direction and speed (up to 108 kilometers per hour) between 15 and 37 degrees.

At an angle of 37 degrees from the vertical position, the lifting cables were load-free; the lifting device was able to be dismantled. The weight of the folding half bridge was now only carried by the lowering device. Once the bridge halves, under constant supervision of surveyors, had reached the horizontal position, they were bolted together in preparation for subsequent welding. To compensate for temperature influences and/or tolerances of the rotary axis, presses were available with which both bridge parts could be aligned to one another in all directions. Once the bolting had been completed, the lowering device was no longer required and the structural static load-bearing system of the utilization status taken over.

During a total shutdown, a maximum of 54 hours were available for the tilting process and accompanying tasks such as the installation of the floor plates of the bridge.